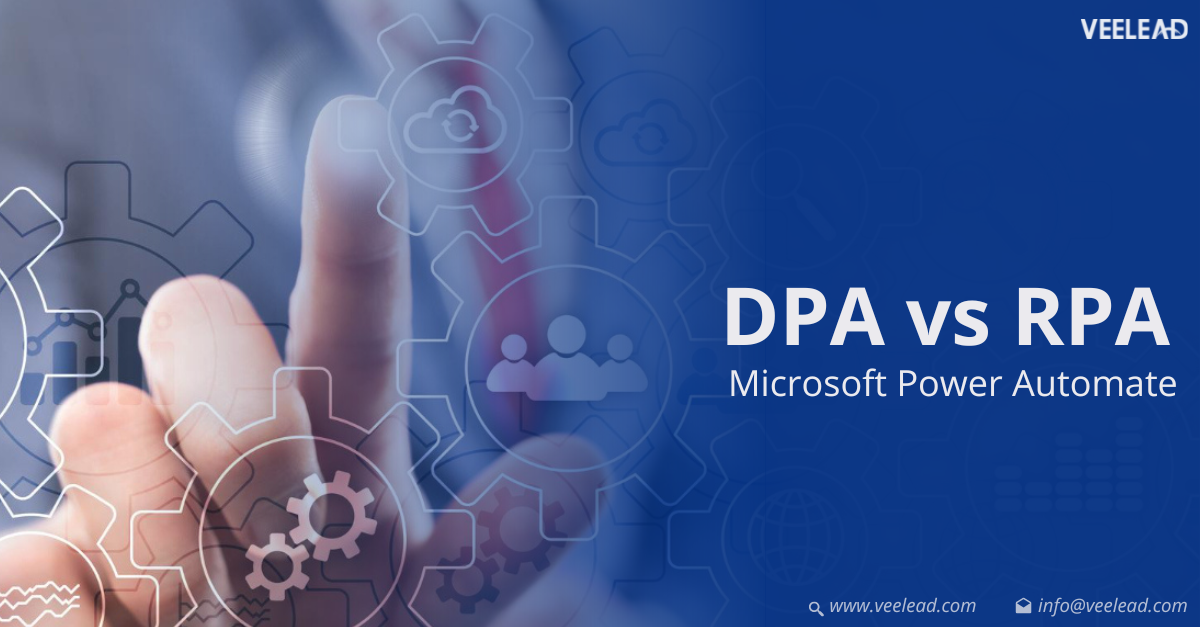 At present, two main categories make up Power Automate’s automation solutions: DPA and RPA. If you mean to make the most of what the platform can bring to the table, you first need to be familiar with how both types work.

In the process, you’ll also clearly see the lines dividing each one and ultimately decide whether it’s better to use DPA or RPA, or both. This post juxtaposes the two and discusses the exact perks of utilizing them in tandem.

What is Digital Process Automation(DPA)?

The main definition of digital process automation is that it’s primarily an amalgamation of bots, AI, people, and data working in sync and synergy with one another to fulfill various automation processes.

These systems are organized with one intent in mind: minimize manual effort, save time, and reduce cost by automatically doing and finishing repetitive tasks in the usual business process. All are undoubtedly hallmarks of automation’s value in these modern times.

Notice how “people” are still included in the definition? This is because, in direct contrast to RPA, DPA in general still requires human intervention, especially when it comes to crucial decision-making.

Digital process automation is a relatively comprehensive category in itself, considering the numerous factors that encompass it. This can also be ascribed to the fact that Power Automate only offers a rendition of DPA, which has its own unique features (e.g. using mainly API-based connectors to build automation workflows).

How does Power Automate’s DPA solution fit inside the umbrella definition? You can start by minding a few of these facts:

What is Robotic Process Automation(RPA)?

As said above, robotic process automation places a clear focus on letting bots carry the full burden of completing tasks by themselves. These can be things like email creation and sending and data entry.

Given the fact that RPA technology is designed to simulate how a human interacts with software through a standard user interface, practically any activity that doesn’t require advanced cognition can be automated with the help of RPA. What makes this capability all the more revolutionary is the fact that it can be applied to almost all major and minor industries.

Part of what makes Power Automate unique when it comes to RPA is that it actually subdivides it further into two: Attended RPA and Unattended RPA. It’s also desktop-based, meaning most of the automation will only occur in the licensed user’s workstation.

Power Automate’s Attended RPA mirrors DPA a lot in that most of the automation still has to be triggered manually and human decisions will still have to be made as the automation process progresses. Since it’s desktop-based, these (the decision-making and automation) are all done on a single, licensed computer.

Related Reading: Choosing Microsoft Power Automate for RPA | Is It the Right Choice?

Benefits of Combining Both RPA and DPA

Many companies that have tried and grown to rely on Power Automate are quick to point out the undeniable advantage of using both DPA and RPA concurrently.

Take this scenario as an example: Not every third-party application has API compatibility, which significantly limits their automation (assuming it’s solely DPA-driven) to those that have them.

RPA serves as a great workaround for companies once they encounter this stumbling block. In short, it’s able to effectively remove the shackles of DPA.

That fact alone already highlights the patent benefit of using both technologies. It won’t be farfetched to say that doing so only unlocks the full potential of automation for most companies, often regardless of the industry that they’re in.

Overall, these advantages become apparent in how the two technologies working together often result in a far more optimized and efficient process flow in a given organization. Of course, it takes knowing the step-by-step process more intimately to see just how big of an impact this strategy makes.

What are some great starting points? Look at how both are being implemented in a company’s onboarding process or making daily network access requests (especially in IT companies).

On the whole, the argument for combining the two can be summed up as follows:

The said synergy could not be more apparent in how Power Automate sets up its DPA and RPA solutions. You can choose from close to 400 third-party applications, most of which already have ready-to-use API connectors to create simple and complex cloud Flows.

As we’ve mentioned above, its DPA arm only works with API connectors. Naturally, it will only be able to work with applications that have an API or allows custom connectors to be made to make automation possible. Once an application that doesn’t meet those criteria enters the picture, it’s time to rely on the platform’s RPA instead.

In short, it’s high time to stop pitting the two against each other, rather it’s better to just focus on the obvious fact that they’re made to aid and improve the entire automation process.

Veelead Solution has 10+years of experience in offering results-driven Microsoft solutions centering on automation. We will be able to deliver your exact goals and for your enterprise to enjoy most if not all the perks of DPA and RPA mentioned here. Schedule a free consultation.