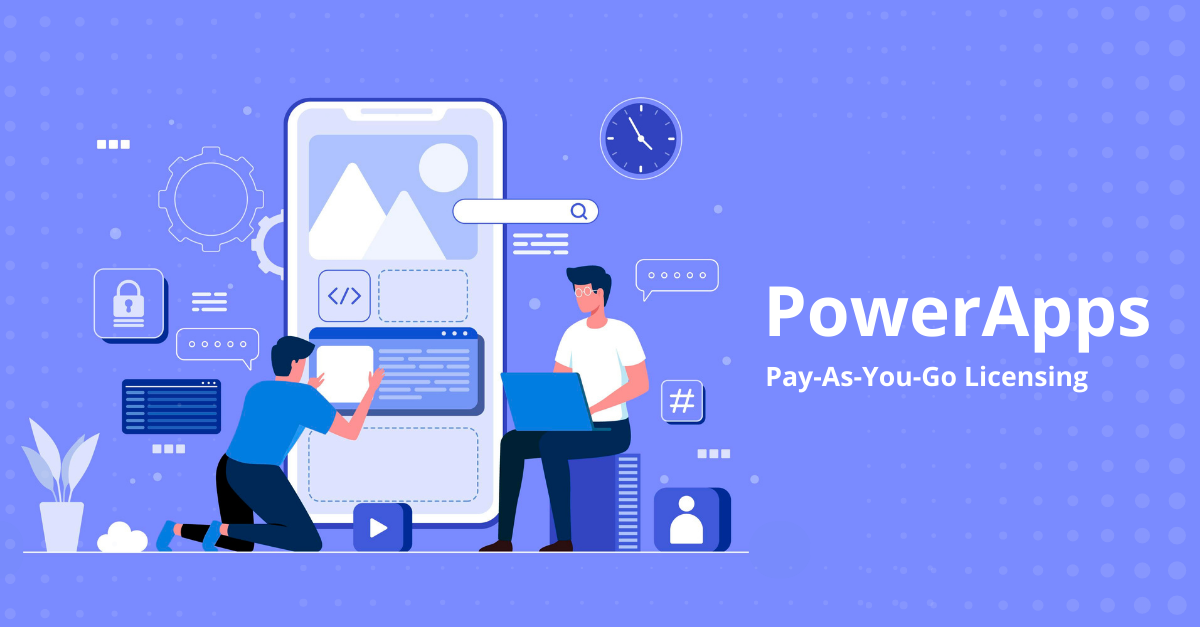 With the revolutionary benefits that Power Apps bring to the table regarding app development, it’s no surprise that more businesses are flocking to it in droves. However, we can’t deny that, to some users, licensing can be a nightmare cost-wise.

Most companies don’t really see the practicality of having to buy a separate full license for every person. The good news is that Microsoft introduced Power Apps Pay-As-You-Go Licensing to overcome that hurdle.

Read on to learn how Power Apps Pay-As-You-Go licensing works and other vital considerations should you decide to opt for it.

What Is the Power Apps Pay-As-You-Go Licensing Plan?

This plan is intrinsically tied to an Azure subscription. Basically, you’ll be able to use that subscription to unlock the pay-per-use benefit of the Power Apps Pay-As-You-Go license.

Obviously, this leads to a huge benefit that other Power Apps licenses can’t provide: better cost-savings. It completely removes the need to pay for more expensive plans such as the Standalone and Developer Plans for every team member in your company.

Another is the fact that with this kind of control and flexibility, you’ll have the freedom you need to scale up or scale down the resources you’re using over time.

It can be summed up as simply as this. You will only be charged every time you use Power Apps’s services and other resources. This could be the custom applications you create or the data storage and data transfer services you choose to avail.

Where does the Azure subscription we mentioned above figure in all this? Well, as of this writing, you’re required to link your subscription to enjoy the perks of Pay-As-You-Go. For every usage you conduct of the said resources via your environment/s, you’ll be charged through your Azure subscription.

Microsoft makes it clear that you can unlink the environment/s from your Azure subscription at any time should the need arise.

Who Are Recommended to Choose Pay-As-You-Go Licensing?

Obviously, this is the best option for users who don’t see the need to commit to a set number of licenses at once. This often rings true for users and organizations that tend to seldom rely on Power Apps as a whole.

However, we can also make a case for its use in the following scenarios:

Before making a final decision, you definitely have to figure out how frequently you and your team members will be using Power Apps’s resources. Still, with the relative flexibility of the platform when it comes to adjusting your licenses according to your needs, this shouldn’t be much of an issue.

Understanding the Relevant Meters in Pay-As-You-Go

To gain a solid grasp of how Pay-As-You-Go charges its users, you need to familiarize yourself with the platform’s so-called “meters”.

Much like in your electric bill, these meters are used in every Power Apps environment. They keep track of PowerApp resource usage, which, in turn, determines how much you’ll be billed.

For example, you create and use custom applications within the platform to enjoy the main benefits of Power Apps such as business process automation and data collection. That means the meter will detect you using two apps, one for the former and another for the latter.

This pricing model, as its name readily implies, tracks only the number of requests made not only in Power Apps but in other services in the Power Platform (e.g. Power BI, Power Automate, etc.)

You’ll be charged for every request in short. What counts as a “request” exactly? It’s every action performed by either a user or the automated process you’ve created.

These actions could include the act of creating custom business applications or triggering flows if you happen to use Power Automate in conjunction with other services.

If you’re not already aware of it, the Dataverse is Power Apps’s cloud-based data platform where you can also perform other basic functionalities such as data transfer and storage.

This meter measures the amount of data stored and transferred in (out of) the Dataverse. We’re talking about being charged for carefully measured volumes of data, which lends to better, more cost-effective usage.

A Well-Oiled Machine with Abounding Flexibility

On the whole, given their distinct functionalities, these meters work together when tracking how you’re using Power Apps resources. They will inevitably reflect different total costs come billing time since not every user has the same usage pattern.

It’s also completely possible to disable a specific meter in any given environment. For example, let’s say you want to switch to a pre-paid plan for the current app you’re working on. You have the option to disable the per-app meter on that app, then switch it to a per-user plan. In short, even if you’re working on multiple apps at the same time, it’s completely possible to have apps under the per-app meter, while others can be licensed on the pay-per-user plan.

Overall, Power Apps Pay-As-You-Go Licensing was obviously designed to address the shortcomings of other Power Apps licenses. This is especially true for those who are having doubts or regret paying upfront for the other standard license plans.

Ultimately, having it available as an option is a great move since it proves Microsoft’s awareness that every business operates differently. Now that you know the amount of freedom that this plan provides, wouldn’t you readily agree that it’s the most practical and cost-effective option compared to the other licenses?